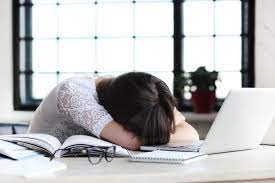 Students become exhausted as they have to stay up late doing homework.

The law for a later start time in California public middle and high schools was signed on October 13th, 2019 by Governor Gavin Newsom (Senate Bill 328). This law is to be enforced in California schools no later than the 1st of July, 2022 and it requires public and charter schools, excluding rural school districts,  to have a later bell schedule.

Studies have found that a later start time helps students focus and learn better in class. According to a 2017 study done by the University of Minnesota that surveyed 9000 students with different start times, it showed that those who started later slept more. Students who got more sleep had better mental health, and less of them used alcohol and cigarettes than those that started sooner. The later schedule also showed an increase in attendance. Dr. Sumit Bhargava, a pediatrics professor at Stanford University, said adolescent brains are still developing, and constant sleep deprivation can lead to the development of disease later in life. The objective for the new start time is that it will help students feel less anxious and depressed, and allow them to perform better in school.

When asked what they thought about the new bell schedule, Wilcox Chargers had various responses. “I strongly dislike it because it goes too late. Compared to the old one, it doesn’t make sense to start us this late [and go] till 4:20 if it’s COVID times.” said senior Jaden Zehna. “[With the old schedule], on Thursday I could go home before lunch. Now I can’t,” added Yen Tran, a senior who experienced the old schedule from two years ago.

“It sucks because I have soccer at six,” said soccer player Miyu Kudo, a sophomore, “and it takes thirty minutes to go home and thirty more to go to the field.” The new schedule has made it harder for parents of students that play sports too. They have to pick up their children later, or even have them walk home when the sun is already down. “My thoughts are that it kinda sucks, and I feel really bad for the people who not only have to go home at 4:20 p.m. but also the ones who have sports who then stay even later,” said senior Dylan Wong.

Not only did students have something to say about this change; teachers of Wilcox also have formulated their opinions. Spanish teacher Mrs. Woo said that she had mixed feelings about the schedule because it makes mornings easier, but four periods after lunch is a bit hard, and it is more difficult for students to focus in their sixth and seventh period classes.

History teacher Mrs.Scott states, “It’s horrific,”when she was asked her opinion on the schedule. She doesn’t enjoy getting out of school so late and has to take a day off for appointments. Students with sports and other extracurriculars leaving in the middle of the school day is also troublesome for teachers. It makes it harder to plan a test day where every student is in class as it can create a lot of makeup work.

However, despite all of these negative feelings towards the new schedule, some students appreciate it.. A new sophomore, Kim To states, “It helps with productivity.”

Sophomore Simon Shems states,  “I think the new bell schedule is helpful for getting more sleep, it’s easier to wake up in the mornings, since school starts at 8:45. She continued to state that the late ending was adversely affecting her routine as she cannot incorporate other activities such as work.

The American Academy of Sleep Medicine says a healthy sleep schedule for children thirteen to eighteen years old is eight to ten hours of sleep a day. Adolescents become sleepy later at night, and during puberty they need to sleep later in the morning. Despite this, having a bad sleep schedule is common in high school students. Some health risks associated with lack of sleep are car accidents, hypertension, obesity, drinking, smoking, drug use, and poor academic grades. They are also more likely to have suicidal thoughts or to self-harm.

Despite the new bell schedule has been scientifically proven to help students get more sleep, it has stirred up disapproval among students and teachers.