The Line of Thought Behind Free Lunch 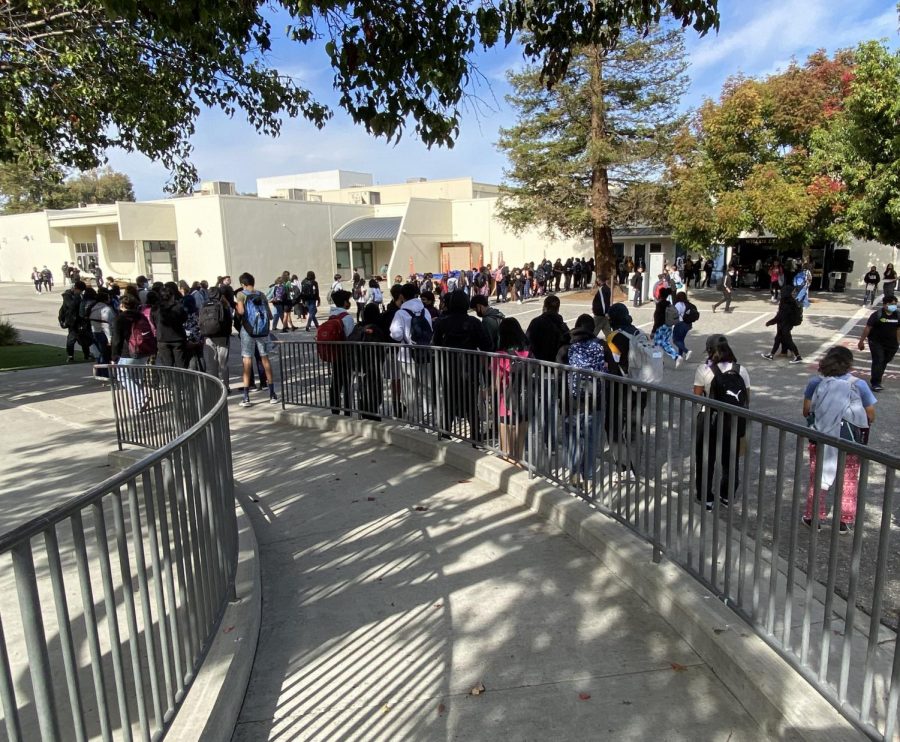 Free food. Perhaps the most effective way to make the prospect of school more appealing, the free food policy instituted this year is one that has affected many of us on campus judging by the lengthy, serpentine lines outside the cafeteria and Express Cafe. But when examining its policy, scope, and history, the large efforts required to keep the program running and the necessity of the program is clear.

Karen Luna, the Director of the District Nutrition Services Department in Santa Clara, agreed to an interview regarding the policy’s large scale. When asked about the challenges which the program is currently attempting to overcome, she said, “The major problems are staff shortages and continuing food shortages. We aren’t short on food today, but we always order two to four weeks in advance, so we’re going to be short in a few weeks. But we have time to catch up and change the menu to make sure we have enough food.” As for the staff shortage, there are 12 less members in the department than usual, so if someone is forced to take a day off as Ms. Luna mentioned they often are, the toll is felt a lot more significantly.

Ms. Luna also mentioned a paper shortage, one of the major obstacles the program is currently facing, saying, “A lot of paper goods come from overseas, and there’s a massive shipping backup at the ports. So it’s very difficult to get things like plates, napkins, and forks.” The CNBC also reported this large-scale shipping backup saying that seventy-seven ships were waiting outside of Los Angeles and Long Beach. It is predicted that the shortage will not be resolved for some time.

Despite its challenges, the current need for the program is clear. According to the U.S Bureau of Labor Statistics, just two years ago in November 2019, California held a record low unemployment rate of 3.9 percent. Looking at unemployment rates today, however, it is apparent how the pandemic has affected the job market. As of September 2021, California experienced an unemployment rate of 7.5 percent, and the unpredictability of COVID-19 and its mutations means that the figure may very well begin to rise again.

The free meal policy itself is an extension of the Seamless Summer Option, a program which allows schools to provide meals to those under 18 during vacations longer than 10 days. On April 20th, 2021, the U.S Department of Agriculture issued a waiver allowing schools across the nation to use the Seamless Summer Option year-round for the 2021-2022 school year which is effective until June 30, 2022.

When asked about the benefits which the policy has brought, Ms. Luna confidently commented, “We’re feeding more kids. For a lot of kids that are usually embarrassed that they are on free lunch, it’s taken away that stigma of getting free food.” The eligibility requirements for school-provided meals in the Santa Clara School District were also very specific prior to the extension of the Seamless Summer Option. Previously, students were required either to fit in under a certain income bracket based on their household size, or to be part of other groups that the government marked as eligible such as foster, homeless, or runaway children. This made it difficult if not impossible for those who may not fit exactly within one of these groups but still needed to be provided meals to apply.

It has not yet been decided whether or not the policy will continue to be implemented going forward. In response to being asked about the idea of it going into later years, Ms. Luna said that it is in the hands of the state government commenting that “As long as it’s offered, we will continue to offer it. California passed a bill that’s supposed to continue it, but it hasn’t gone through the budget process yet, so we’re still waiting to see what that means.”

Whether or not the program is able to extend into the next school years, there is no doubt that it has had a significant impact on the Wilcox community. Despite its challenges and shortcomings, the policy currently supports countless students in need of meals, and that itself is a rather large achievement.