United Against the Big Issues: UNGA 2021 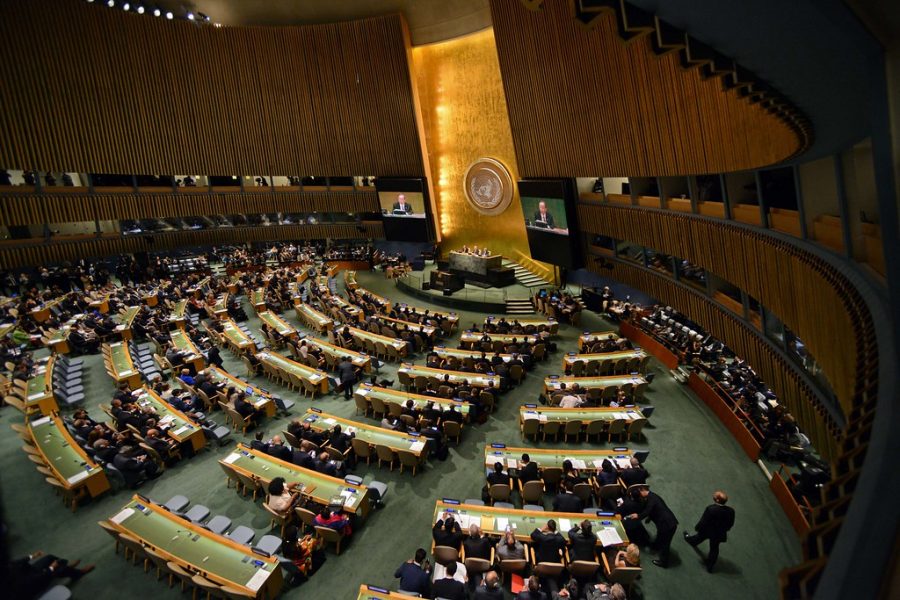 The 76th session of the UN General Assembly started on September 14, 2021. On that day, Abdulla Shahid of the Maldives was sworn in as the General Assembly President and opened the 76th session. The General Debate is the annual meeting the hinted the beginning of the assembly, and that took place from the 21st of September to the 27th of September. Due to the ongoing global pandemic, the number of delegates allowed into the General Assembly Hall was limited, and UN Member States were encouraged to provide pre-recorded statements instead of traveling to UN Headquarters. Over one hundred Heads of State and Government attended in person.
The start of global governance, developing the UN’s “Common Agenda” started with a conversation with people around the world followed by conversations between governmental leaders. The assembly is then continued through negotiations/adoption of a Declaration, with further involved consultations, identifying actions to implement the 12 commitments, and will result in further consultations to take action on the recommendations.
Leaders are encouraged to focus on the theme, ‘Building resilience through hope – to recover from COVID-19, rebuild sustainably, respond to the needs of the planet.” To the casual observer, it may appear to be delivering a laundry list of issues, but those listening closely will hear what our world will benefit future generations.
During the start of the assembly, Venezuela urges leaders to build a ‘new world’ & demands the end of sanctions against Venezuela. “Financial accounts are being chased, gold has been seized and blocked from the legal international reserves of the Central Bank of Venezuela in London”, Mr. Maduro, Venezuela’s president, stated.
Venezuela has undergone a painful phase to a recovery phase in 2021. This can be the aftereffects of sustained growth in sciences, technology & innovations, and “spiritual capacity”. There are current oil companies that are prevented from trading their products and even opening bank accounts just to make commercial transactions. It is “a financial, monetary, commercial, economic, energy persecution. It is systematic, cruel and criminal. Venezuela raises its voice to denounce it before the peoples of the world”, as he added. Mr. Maduro demands the end of all sanctions against his country.
The President added that this has also been a year for Venezuela to reach towards inclusive peace dialogue globally and also hold regional and local elections within the country With the support of Mexican President Andres Manuel Lopez Obrador, the Netherlands, special diplomatic aid of Norway, and the Russian Federation, Venezuela is addressing a national agenda to move forward to a comprehensive social and economic recovery. Finally, Mr. Maduro ends with a call for the “building of the new world”, hegemony-free and strictly based on the fundamental principles of multilateralism (determined by collectively developed rules that ensure sustainable and effective cooperation) and international law.
The final item on the list was South Korea’s call for an era of global community led by the United Nations. According to Korean President Moon Jae-in, “to facilitate mutually beneficial cooperation within the framework of the multilateral order, the UN must become an institution that builds trust among nations”. He pledged that his country would “take the lead in putting forward a vision for partnership, and co-existence that can be shared by both developed and developing countries.”

The group will lead “the global agenda for future generations, including sustainable growth, and to expand diplomatic power in line with Korea’s elevated status in the international community”. President Moon said. He decided that bringing BTS along will be a gateway between the youth and the world now. He continues to say that, “the activities which BTS who has been spreading hope and positive energy will carry out as a special envoy to the president are expected to greatly contribute to enhancing Korea’s national status as a leading country in the post-corona era.”
BTS sang a song about hope in the face of a pandemic, then delivered a live speech about climate change, digital community, vaccines, and the ultimate power of youth to change the future. The group’s participation at the assembly was intended to form better communication with future generations and bring awareness to pressing international issues.
The Heads of Government or State will keep a watch out on influencing the numerous events taking place before the end of the year. This is including G20 to conferences of the parties for the biodiversity and climate change conferences. An additional high-level moment for the international community in 2021 will focus primarily on sustainable transport. The goals for the upcoming year of 2022 will be gatherings on the ocean and the Stockholm Conference; the 50-year commemoration of environmental governance.