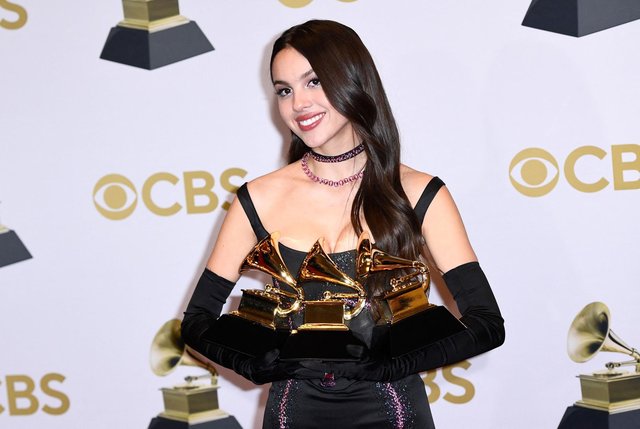 On Sunday, April 3rd, people from all over the world gathered in anticipation to watch the 64th Grammys award show that took place in Las Vegas. While many popular artists such as Olivia Rodrigo took home three Grammy awards with her, other entertainers such as Doja Cat added tension to the atmosphere with her recent tweets regarding her planned leave from the music industry. Nonetheless, these artists performed their famous singles that we have been listening to on repeat on the radio for the past year.
One of the star performances during the award show was by Bruno Mars and Anderson Paak who partnered up for the popular song “Leave the Door Open”, making a crushing comeback to the music industry after a two-year hiatus and leaving his fans in utmost awe. Dressed up in white sparkly jumpsuits, this duo did not fail to leave everyone’s mouths wide open with their performance of 777 and Get On Up, according to PitchFork. Along with their eye-catching show, they snagged four awards for all of their nominations, including Record of the Year, Song of the Year, Best R&B Performance, and Best R&b Song. Fans were ecstatic to see their favorite artist back on stage and anticipate seeing their album An Evening with Silk Sonic receive the same amount of love at next year’s Grammy Awards once it is eligible for nominations.
Nineteen-year-old Popstar Olivia Rodrigo was nominated under six categories and won three of the best new artist, best pop solo performances, and best pop vocal album, according to CNN. Rodrigo also performed “Driver’s License” in an off-white flowy dress with the setting of a vintage car and mysterious street that was set on the stage, mesmerizing the audience with her passionate and heartfelt singing. After receiving her awards, Rodrigo walked down the carpet backstage and accidentally dropped and broke one of her awards, similar to the time when Taylor Swift did the same exact action. Due to the irony, many fans believed that she was reliving Taylor’s journey as they also expressed a similar facial reaction.
Surprisingly, Kanye West won two awards for Best Rap Song and Best Melodic Pop Performance despite being “cancelled” for his social media behavior regarding his love triangle with Kim Kardashian and Pete Davidson, according to Salon. With a total of twenty-four awards, West creates a new record for hip-hop artists with the most Grammys.
However, West achieving three awards was not as confusing as Doja Cat stating that she will be leaving the music industry after fulfilling her contract obligations. After giving her fans a wave of anxiety with her tweets that were coated with frustration and annoyance, she was confronted with questions by the Grammys’ interviewers about her sudden change in heart. Cat gave no response except for a small smirk and quickly changed the topic to her sentiments of gratitude towards the award show. She left the show with the award for Best Duo/Group Performance for Kiss Me More in her hand.
Other captivating performances included Billie Eilish’s Happier than Ever with her shirt of Hawkin’s face who had passed away earlier in the week and Lil Nas X with Jake Harlarow who is the audience’s beloved favorite. According to LATimes, this year’s TRP was slightly higher than last year’s, which had an all-time low audience rating as it averaged 8.81 million viewers which could have been caused by the “erosion of live TV viewing due to consumers migrating to streaming video platforms”, according to Yahoo. In spite of everything, the Grammys’ 2022 held iconic performances as well as surprising wins, marking the end of the award season.